Join the Pacific Battleship Center and the Robert Irvine Foundation for a culinary adventure on the fantail of Battleship IOWA! This collaborative fundraiser will raise critical funds for maritime youth education and veterans programs for both not-for-profit organizations.

Robert Irvine is a world-class chef, fitness authority, and philanthropist. He seeks to inspire people to live better through all his endeavors. A tireless supporter of our veterans, he gives back to those who defend our freedoms. Robert pioneered a new genre of programming for Food Network with his extreme cooking challenge show, Dinner: Impossible, which ran for 7 seasons and over 100 episodes. He parlayed that success into the even more popular Restaurant: Impossible, which ran for 13 seasons and 160 episodes. Robert didn’t just renovate restaurants and retrain staff in record time, he counseled owners through personal problems that were destroying their businesses. At its peak, 1.2 million viewers tuned in on a weekly basis. Robert has also hosted or appeared on Food Network’s Worst Cooks in America, Next Iron Chef, Restaurant Express, Chopped: Impossible, Guy’s Grocery Games: Impossible, A Hero’s Welcome, Food Network Star, ABC’s Body of Proof, ABC Family’s Melissa and Joey among others.

Robert is a tireless supporter of our nation’s military. He believes that none of his success would be possible without the brave men and women who defend our freedoms, and so he gives back generously with his time and treasure. Robert founded The Robert Irvine Foundation in 2014 to support the veterans and veteran causes that need the most help. A portion of the proceeds from Robert Irvine Foods goes directly to the foundation, along with public donations.

Entering service more than 70 years ago, the USS IOWA deployed to the South Pacific in the uncertain early years of World War II. The iconic battleship served with distinction in that war and later, during the Korean War. In the 1990s, as the Berlin Wall crumbled, the IOWA concluded her active duty. Battleship IOWA now serves as a historic naval ship museum focused on three core pillars of Education, Veterans, and Community. Forged in war and a guardian of peace, this national treasure keeps watch as the proud sentinel of the LA Waterfront. IOWA’s teak decks and steel bulkheads echo the words and deeds of history, having carried upon them three U.S. Presidents, six of the nine American five-star military leaders, countless foreign dignitaries, and most importantly, thousands of her own heroic IOWA sailors. Visitors are awed by the IOWA’s proud legacy as one of the fastest and most powerful ships ever to sail the world’s oceans.

Event details to be announced in February, but Save the Date now! 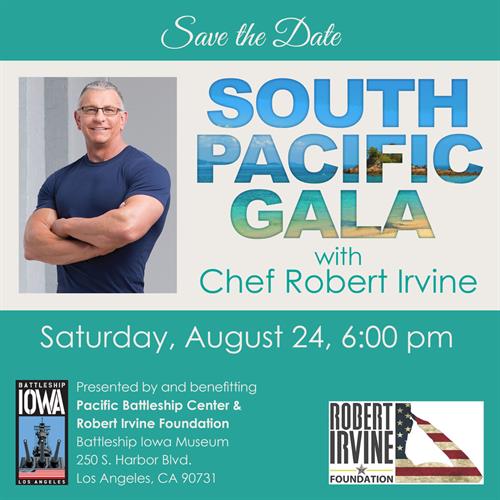 Ticket prices to be announced in February.