Rescue In The Philippines FREE SHOWING 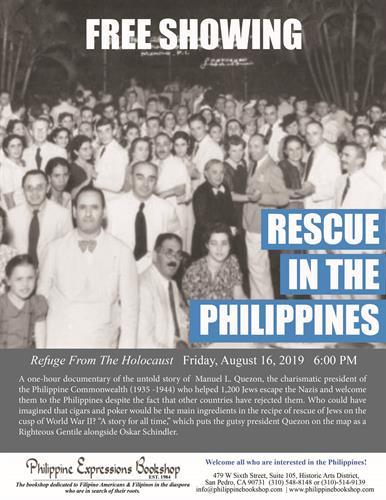 Rescue In The Philippines
Event Description:
Rescue in the Philippines: Refuge From The Holocaust. A one-hour documentary of the untold story of
Manuel L. Quezon, the charismatic president of the Philippine Commonwealth (1935-1944) who helped 1200 Jews escape the Nazis and welcome them to the Philippines despite the fact that other countries have rejected them. Who could have imagined that cigars and poker would be the main ingredients in the recipe of rescue of Jews on the cusp of World War II? "A story for all time, " which puts the gutsy president Quezon on the map as a Righteous  Gentile alongside Osckar Schindler.
Location:
Philippine Expressions Bookshop
479 W. Sixth Street, Suite 105, SP
Date/Time Information:
Friday, August 16, 2019
6PM - 7PM
Contact Information:
Philippine Expressions Bookshop
Send an Email
Fees/Admission:
FREE
Set a Reminder:
Business Directory News Releases Events Calendar Member To Member Deals Marketspace Contact Us Information & Brochures Join The Chamber